Local 81 is your Tokyo based film/tv production oasis. Our mantra: integrity in our beyond-the-call-of-duty work. 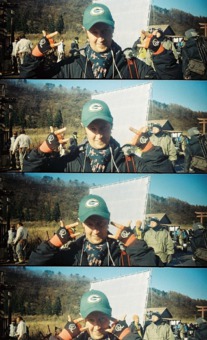 Local 81 is your Tokyo based film/tv production oasis. Our mantra: integrity in our beyond-the-call-of-duty work.

Christian Storms, Local 81 owner, has produced over 100 hours of award winning docos, TV shows, music videos and commercials with his A-list production crew. He has co-produced both foreign and domestic features up to 5 million as well.

Being fully bilingual and bicultural, helps me help you. I have subtitled over 70 Japanese films, interpreted for many creative talent and have interviewed over 400 people. As an on-set interpreter and dialogue coach working on feature films for Miike Takashi and the movie THOR in LA, I have much to offer. Not a problem I cannot solve; that is my job.

When your work speaks for itself, don't interupt.

WHAT DOES LOCAL 81 MEAN?

Clients keep coming back for our co-producing skills that achieve their goals. They become family and refer their friends.

Very excited to share with you the client approved fine cut of “Johnny” - our first mini doc. It is - in a word - extraordinary. It goes without saying, that without you, this would never have been possible. Every time I watch this video I am reminded of that - and of you. And that makes me genuinely happy. -- Angela Carroll, The&Partnership

Christian, Toby and Vanessa are back in New York, and have nothing but raves for the shoot and for the excellent job you and your team did. Thanks for going the extra mile for us. The footage is fresh, extraordinary, and beautiful. I'm really pleased that we had the opportunity to work with you. -- Robert / Locker 100 (Executive Producer for MARKED for the History Channel)

I wanted so to say a huge thank you on behalf of us all here in the UK!! We all have really enjoyed working with you, and do hope that we can work again on more projects in the future. I'd be really grateful if you could also pass on our thanks to all your team over in Japan who have worked so hard on the shoot. Many thanks again for all your hard work on the project - hugely appreciated!! -- Susie Cooper Production Manager, Top Gear Entertainment, BBC Vision

Friends, Please forgive such belated thanks for all your hard work and hospitality. The record company was delighted with the results of our efforts and there are those who can not quite believe we accomplished so much in so little a time ("And that includes a national holiday" I like to quip). Most obviously, the array of locations we shot in and the cohesive narrative. I hope there will be other times, as I loved Tokyo and the Japanese were hospitable and gorgeous, often at the same time. Thanks again fellas. It was a week to remember. --Rupert Jones (director of El Presidente / Turn This Thing Around)

I feel like we got the best production help in Tokyo but more importantly, met a very fine new friend and the guys do as well. And let me tell you, I've been with Dustin on and off for 13 years and he does NOT give a compliment lightly. No where we have been has been as seemless as Japan and we all know we have you to thank for that! Amsterdam was COOL and really, all of Holland has been lovely but Japan remains a great memory. -- Clare Libbing - producer, Creative Street Media Group

Dear Christian, we got back to London yesterday and i just wanted to say thank you for a wonderful shoot in Japan. i can't tell you how excited i am about the film. my heart is full with all our little adventures. thank you for making it all possible. please dont forget to look us up when youre in london! i hope to work with you very soon again... all the best diene (director for LOCKED UP ABROAD for Nat Geo, production company is RAW TV)